So first game of the Blog Wars tournament and I drew Dave *not that one* Cameron and his Blood Angels. Amusing seeing as how we are friends, but I don’t get to see Dave much and have never had a one-on-one against him. 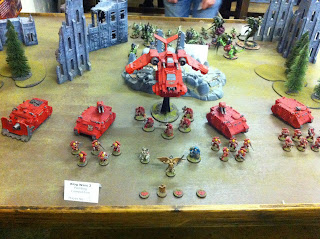 
Librarian & Assault Terminators in a Stormraven


Assault Marines in a Razorback


Assault Marines & Apothecary in a Razorback


Tactical Marines in a Rhino 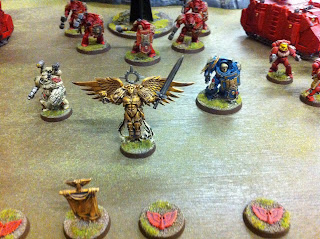 The mission was Annihilation with Pitched Battle Deployment and the Unique Character was worth 2 KPs.

I thought this should be a pretty straightforward game and the small volume of Dave’s units and mech should work in my advantage unless I started haemorrhaging KPs (as ‘Nids are prone to do…).

I won first turn and deployed in a line across the board – with Hive Guard and Tervigons on each flank and Swarmlord, TFex and Trygon in the middle bubbled by Gaunts.

Dave went Null Deployment and my first two turns were spent spawning Gaunts (I think I got 3 or 4 broods of 10 before pooping out) and got the entire deployment line to the middle of the table.

Dave’s turn 2 he brought in the Stormraven (with Lib & Termi’s), Vindicator and Scouts in the far right table corner (about as far away from the Swarmlord-core as possible). He managed to take a few wounds off the nearby Trygon with shooting.

My turn 3 and my entire right flank advanced to get in range of the Marines. The left flank advanced – but cautiously in case he deployed in the left corner and made me waste more movement. With shooting the TFex exploded the Vindicator and the Hive Guard exploded the Stormraven; taking an Assault Terminator with it. The Trygon charged the Termi’s but was out of range.

Dave then deployed a Razorback unit from Reserve into the right corner and got the Termi’s into a charging position on the Trygon. Shooting softened up the Trygon a bit more before the Termi’s charged and the Scouts killed some nearby Gaunts. In combat the Librarian and Trygon fought at the same time – the Librarian failing to kill the MC and the Trygon took down a couple of Termi’s. The remaining Termi’s then Stormhammered the Trygon into pulp and consolidated into a nearby building for cover.

My turn 4 and I moved everyone as fast as I could to the right corner, but the Swarmlord, a Tervigon and TFex were lagging around the middle of the table, leaving my Hive Guard, a Tervigon and some Gaunts to fight the Marines. In shooting I managed to pop the Razorback and kill most of the Scouts. Nothing was in charge range.

Dave then brought on the other Razorback and the Sanguinor…guess where? The right table corner… A combination of the Sanguinor and two Assault Marine squads killed the Tervigon on that flank.

My turn 5 and I rushed everything I had into the right corner to try and kill anything to even up the KP’s, whilst making sure anything fragile was out of range of the Sanguinor and Assault Marines.

In shooting I managed to finish off the Scouts but only managed to kill a couple of Marines (damn AP4….).

Dave’s turn 5 and he finally brought on the remaining Rhino & Tactical Squad from Reserve. Being eagle –eyed and very crafty, he brought them on in the left corner, disembarked the marines and emptied everything he had into a straggling brood of Gaunts. He managed to kill exactly all of them.


Aaaaargghh!!! F*cking crafty marines!!! Dave played a very good game and it was his tactics that won him the game. By deploying in the far corner, it meant that I never got (the strong) half of my army into combat with him….

I realised I may have messed up by targeting his Assault Marines with my Hive Guard in the 5th turn instead of Sanguinor – the thought at the time was that Sanguinor would probably have lots of fancy saves, so it might have been easier to take down 5 Marines. It probably wasn’t really – if I had gone for the Sanguinor and he had a couple of bad rolls, I would have walked away with the win.

Oh well - maybe next game.
Posted by the 6th degree