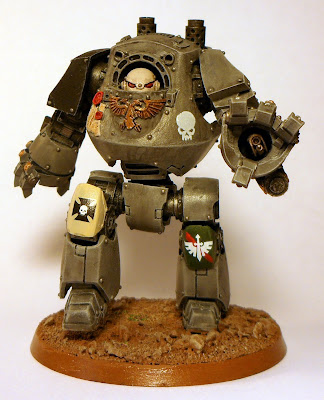 Hello readers, thank-you for stopping by.

After I saw this on the FW website, I had to have one. I love it. Now they have many weapons and with the latest publication, official rules - however, how a Heresy Era Dreadnought gets into my post-Heresy era Chapter, never mind the five I'd want (!), would be a problem. 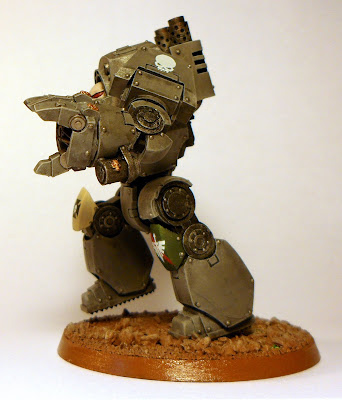 The astute among you will have already noticed the Dark Angel knee pad. Well, since the Relictors (originally the Fire Claws)were formed in the age of Apostasy to protect the Imperium from the Eye of Terror a full 5 Millennia after the Heresy, I needed a link to have a Heresy Era Dreadnought - easy, the fluff (here and here) has my Chapter going around finding Relics and Chaos Relics and putting them to good use fighting the enemies of the Emperor, and they were formed from the geneseed of Dark Angels and Ultramarines, therefore, after coming across a deceased and lost, presumed destroyed, Dark Angel entombed in his sarcophagus, they disposed of the pilot with full Chapter honours and to enable his Chapter and personal honour to live on, and use such a rare and valuable war machine, they repaired and recommissioned the Dreadnought to continue his fight against the enemies of man with another honoured Brother Marine entombed after grievous injuries. 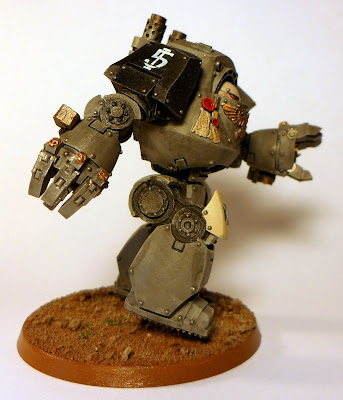 This Dreadnought is also attached to the 5th Company and bears the colours, black shoulder guard. His Terminator Honours are on his other knee pad. He is armed with two DCCW for the extra CC Attack and with Storm Bolter and Hvy Flamer. Fleet, AV13 Front Armour and 6++ in CC makes him a worthy adversary. 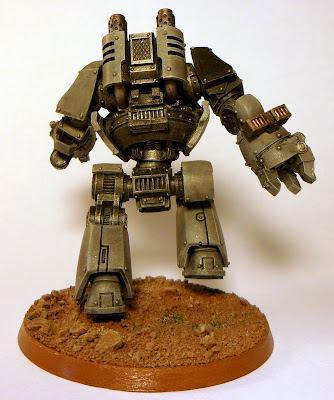 I love this model, and it went together like a dream, one or two very small air bubbles in the resin, however, fully poseable arms, fingers, legs, and feet with straight toes or bent - I've used one of each. I pinned his one standing leg to the base for stabilty and strength. I leave you with a comparison shot with a normal Dreadnought for scale. 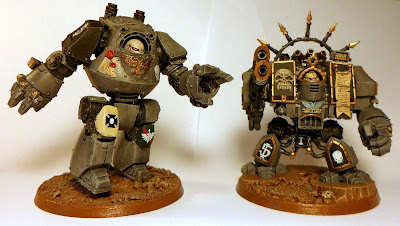