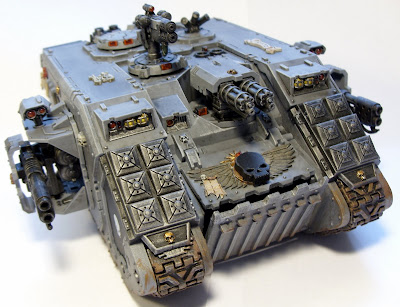 Meet the latest addition to the ever expanding Relictors Battle Company. 'Zeus' the Landraider Redeemer. This will give me some well earned firepower against the bad dice rolls I usually have. Since I play Pornstarjedi's Ultramarines mostly, the Strength 6, AP3, Template weapon the Flamestorm cannons give is a must for up close and personal death to the loyal lapdogs. Of course he know's that too so the plan is still to build another two Landraiders, a Crusader for the immense transport capacity, and a Godhammer 'normal' Landraider - because I can. 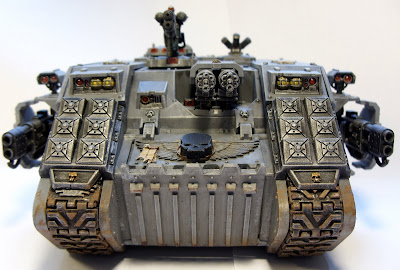 I've painted the inside of this one, however on completion, the doors are fiddly and don't operate correctly, so I reckon the next two will not get painted inside - see previous post - but at least I know it's done. 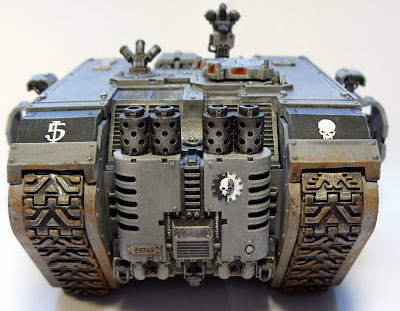 All the Gemstones, lenses and scopes have been 'Ard Coated to simulate glass and the Multi-Melta was mounted on a carved up HK missile I wasn't using. I thought the spindle on the turret mounted MM was too flimsy and I didn't want anyone poking out the hatches on my first Landraider. Maybe the next. With the Machine Spirit, a MM is a must I reckon - well, that or the Assault Cannons... depends how many marines survive the Flamestorm... 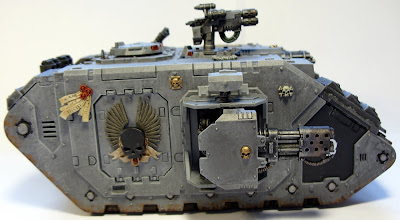 The real Zeus can be found here in the previous WIP post. 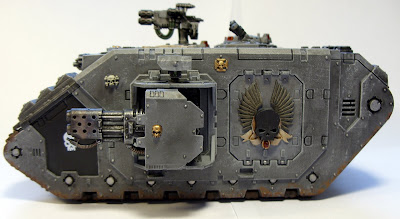 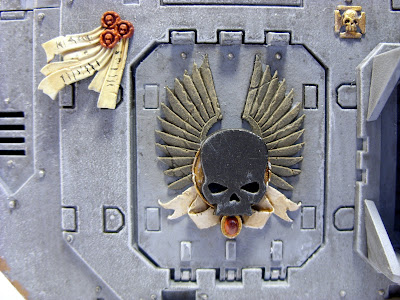 I used the Forgeworld Red Scorpion doors for this Landraider Redeemer with a skull to match some of my Rhino's doors taken from the bright green wound markers in AOBR, I have a set of Terminator Honour FW doors for the Crusader and finally I might do a bog standard set of doors on the third. Oh.. there is always a Terminus for Apoc...
Hope you like, bigger pics in the Finished Relictors Web Album in the right hand bar>>>
Posted by Siph_Horridus