A weekend of 40k started with a cheeky 10 on 10 marine skirmish. Both sides had a flamer/missile launcher plus a sergeant armed with close combat weapons. We decided that all terrain counted as a 2+ save ('cos Power Armour is 3+ anyway), and that unit coherency did not apply (necromunda style!). 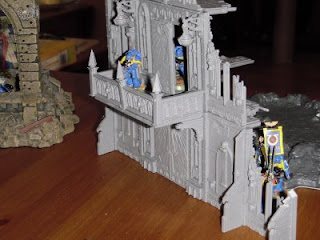 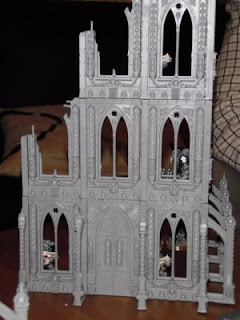 We were using some newly built buildings, Siph took a defensive position in the administratum building, with the UM looking to break down the left flank in numbers.

The game was pretty frantic, with Siph cursing the dice gods once again. Siph's initial attack down one flank resulted in four dead Relictors, falling to bolter shots and close combat. This left 8 UM, against 6 Relictors.

The Relictors changed tactics to sit within the ruins and wait for the UM advance. Spurred on by the earlier success the UM advanced forward! - Could they deliver the killing blow? 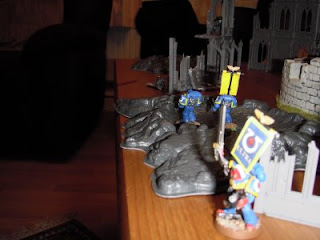 The tides turned with rapid fire from the now four Relictors holed up in the ruins, cutting down UM one by one until it was 3 on 3.

The final showdown was fought in a crater, 3 relictors charged into 2 UM within the crater striking both down to the loss of 1. The final UM, armed with the missile launcher watched on, and in a desperate charge for victory dived head long into the waiting Relictors. The dice gods smiled at Siph, as he took two wounds to nothing killing the final UM. 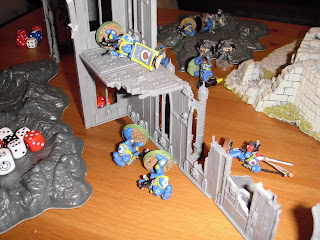 The battle was over 15+ turns, having the cover save made the game more interesting as marines searched for, and hugged any cover. Missile launchers were pretty ineffective with all their shooting, the majority of shots missing, and any hits saved on the 2+. Bringing the terrain save to a 2+ actually meant that the Marines used the terrain for once rather than relied on the armour saves. Great fun and a tasty start to the main event on Saturday, 3000pts - hardcore.
Posted by Lord TITANium Halfpenny