As promised, some more phots of my Relictors.

I have a couple of squads of scouts finished. Firstly with bolters and a missile launcher, the second squad with sniper rifles and a heavy bolter. My paintjob came from the idea that scouts would still wear their Chapter colours (Relictors Grey Armour) but would concede to some sort of camouflage (Cloaks and Trousers/Tunic) in order to be able to infiltrate. Thus, my guys have trousers and tunics to match the base colour sands, camo cloaks and camo silencers. The Hvy Bolter chap is a simple plastic conversion from the scout boxsets using a sniper cloaked body and cut down Hvy Bolter. The Sergeants have a normal marine head filed down to fit and one scout uses a IG head. The base of the Hvy Bolter has some 28mm scale Shell Casings I got from ebay.The sniper squad have a Hvy Bolter after reading an article on scout tactics from the Games Workshop website. I plan to make the bolter squad to 10 men so I can either use it as full squad or two combat squads. 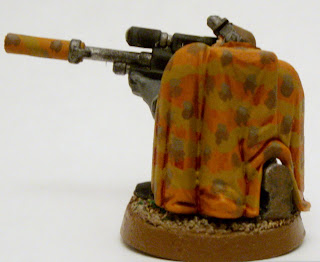