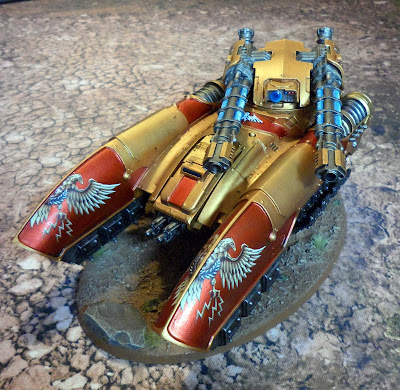 Hello all, thanks for dropping by. My latest offering from my scheduled pile, is a Custodes Caladius Grav-Tank, not to be confused with the Callidus Assassin! Both deadly.
This tank is armed with the fearsome double-barrelled Iliastus accelerator cannon, an advanced weapon which was to become the precursor to the main weapon of the Legiones Astartes Sicaran Battle Tank. The Grav-Tank is also armed with a twin-linked Lastrum bolt cannon, exemplars of bolt-weapon technology whose bolt shells are customised mass-reactive heliothermic warheads... they hurt. 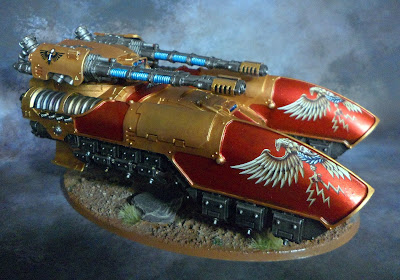 The decals were from the FW Custodes decal sheet. The red is a clear red over the gold base colour, giving a nice metallic red finish. The gold is Retributor washed Reikland and a highlight of Auric Armour. 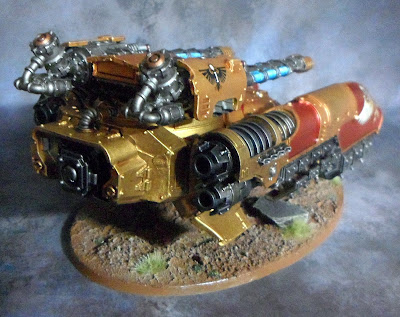 The design at the rear is similar to the modern Impulsor and Repulsor craft, probably lifted from this by Belasarius Cawl. The gold in this picture has been washed out by the camera, but is the same as the surrounding areas. 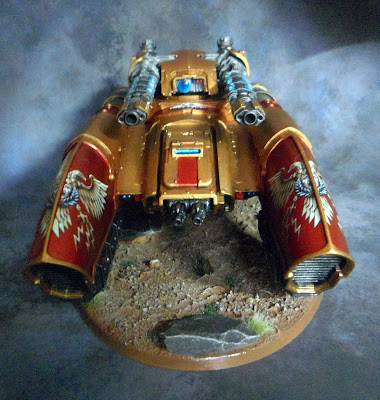 Completely different from the rest of the Imperial stocky bulky un-streamlined vehicle range, which I really like, sets the Custodes apart more than a 'gold' Land Raider! I drilled a hole in the bottom, added a perspex rod to mount the skimmer, I did add magnets but they came away from the rod and now two reside up in the hull... but the rod acts as a decent enough support without magnets. The base was done my usual recipe Mournfang Brown / Karak Stone / Ushabti Bone and slate chip from garden. 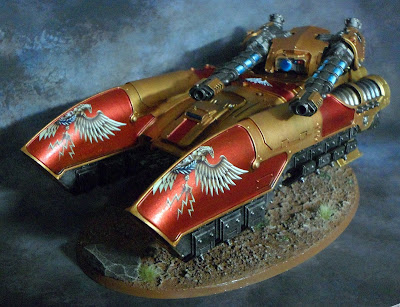 I may have to get a few more in time, but a nice addition for now to my fledgling Adeptus Custodes force.
Cheers, Siph (5pts)
Posted by Siph_Horridus