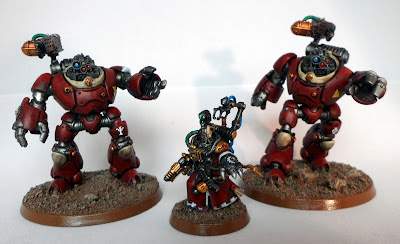 Hello Readers, thanks for dropping in. Not my work to show you, I've just tinkered with the faces, fists and bases, all the hard work and most excellent praise should be credited to Mordian7th. I was lucky enough to be able to purchase a fully painted Skitarii and Ad Mech army from Mordian7th along with the Vorax Battle Automata Robots I've already posted about. I wanted an Ad Mech army and happened across his post selling his, so I got some funds together and secured a purchase, he is a great chap who even offered my blogger discount on postage - top guy. 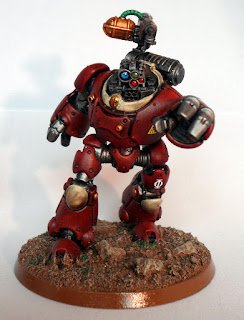 I really detested the 'Danger Robinson Family' look of the stock heads of the Kastelan Robots, so (apologies Mordian7th!) I took my dremel to them and removed the domed helmet and added these 'Wargame Exclusive.com' 3rd party company 'Imperial Mechanics' heads instead, changes the whole look of the model from 'cartoon' to 'battle worn robot' IMHO. 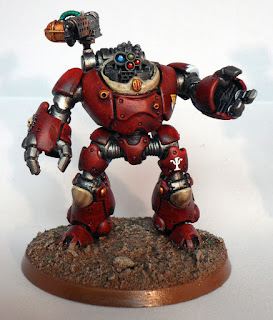 I did re-do the power fist fingers back to base metal colour, as my power fists don't have the blue glow that Mordian7th's did. I also weathered the Incendine Combustor barrels and did the bases to fit in with everything else I have. Other than that, it's all Mordian7th's great work! 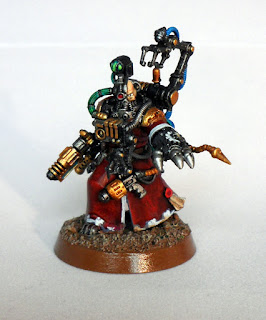 Here is the Datasmith, in battle he is responsible for altering the protocols of the robots to suit the battle, either ranged, or CC bonuses - remove him and these become less than a dreadnought - stuck in a certain protocol. 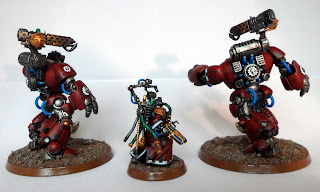 And a shot of the rear of the miniatures. 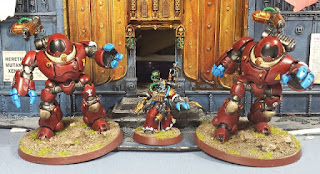 And finally, a shot of Mordian7th's hard work untampered by me. Thanks for dropping by and thanks for these great miniatures Mordian7th! They will be used at BlogWars X next month! Cheers fella.
Posted by Siph_Horridus