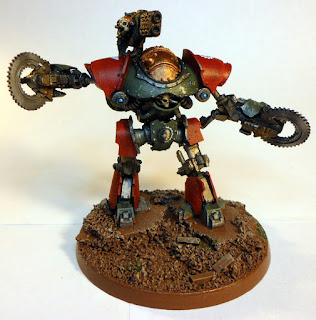 Hello Readers, thanks for dropping in. here is my latest offering to the painting Gods, a Mechanicum Castellax Battle-Automata armed with Multi-Melta and Power Blades with Flamer and Boltgun. 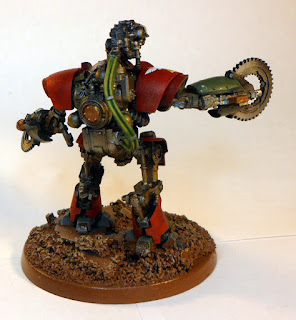 This was a part-painted purchase I made at cost price as the old owner wanted to move on to another army and have made the scheme more Ad Mech than the original green US Army style the previous owner had started, but I liked some of the green bits, so chose to keep the torso and fists green. I painted the red plates, the details and power cables and lenses and weathered the battle plates, multi-melta and did the bases to my usual standard. The paint job before was rather limited and no details but was fairly neat so I didn't need to strip and start again as such. 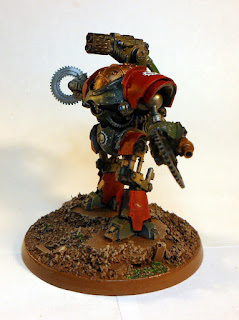 I have no idea of the rules for 40K for these, hopefully I'll get hold of the Taghmata Army Book and field these with my Vorax Battle-Automata and my recently purchased Ad Mech and Skitarii units from Mordian7th. I did pick up some Ad Mech transfers so I applied these to make the force more coherent. I also picked up two alternative heads for the bubble headed Kastelan Robots from Wargame Exclusive.com, the original GW heads are too 'danger Robinson family' for my liking... 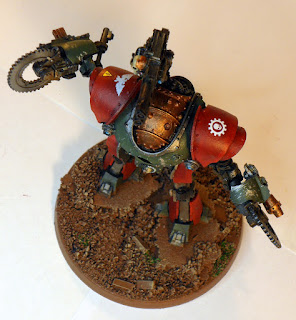 I have 5 Castellax Battle-Automata and 2 Thanatar Siege-Automata with Hellex Pattern Plasma Mortars! As well as a number of units from Mordian7th to update the bases to match mine. Great fun, I'll post once updated and battle ready now I've bought the Codex Ad Mech and Skitarii, some great units I may have to try out at BlogWars X friendly tournament next month.
Posted by Siph_Horridus