Hi peoples - today I am showing off the Lord of Iron; my Lord of Skulls conversion. 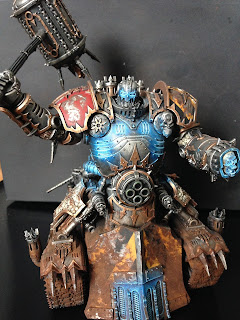 When Alex opened up Blog Wars 9 to super heavy Lords of War, I decided I wanted to to take one of these to mix things up (turns out its not great in tournaments). The problem is, the model is a bit meh... I really didn't like the static pose and tbh I'm not a fan of Khorne, so would have to paint mine completely differently.

So - first up, the conversion work.There were a number of basic changes and a few bits of rebuild. First up, the head; I really wanted the model to have an Iron Warriors mask, but I'm not that great with greenstuff, so ended up just using the head without the horns/trim. 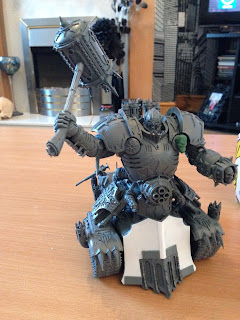 One of the small circular shoulder crests got removed and replaced with an Iron Warriors skull that was greenstuff cast off of a set of Forgeworld doors.

Some Assault Cannons were cut down and added to the waist - you know, just because...

The dozerblade previously was covered in skulls and spikes, so the spikes got removed and plasticard used to make a more traditional flat dozerblade surface.

I had already decided to change the blood vats on the back and liked the idea of it being a bit of a gun-carriage, so used some spare parts from a Baneblade kit to add some Heavy Stubbers and a few missiles.A beaten-up shield from a Dreadknight was added as a trophy from its first game where it smashed apart a GK/Knight army. 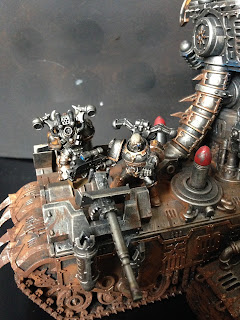 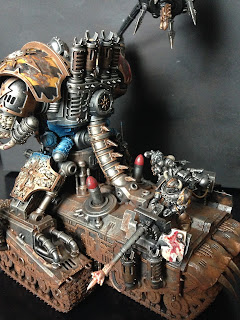 Finally the weapon; I felt that the Axe wasn't very Iron Warrior-y, so used one of the unused blood vats and added a few spikes here and there.The pole is made from some spare cabling from my Warhound (which goes to show the size of some of the parts on titans...). 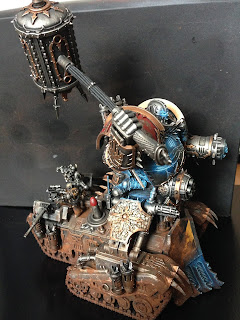 From a painting point of view, I treated the model like any other Iron Warrior vehicle (a tutorial is coming soon - I promise!), using the same chevron style on the shoulder pad and dozerblade to fit the theme of the rest of my army. 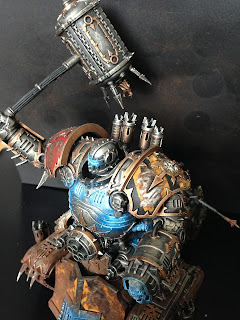 The model is full of vents as well,. so I really wanted to push the glowing-effects, trying to make it look like it was fuelled from within by some sort of daemon-fire. I hope it comes across ok... 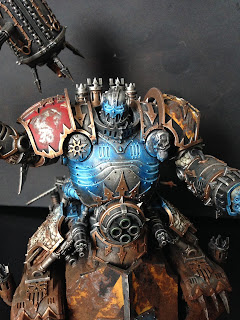 Anyway, I hope you all like it - apologies for the crap backdrop, I really need to get a better photo-kit if I am going to be painting up many more big mini's - an A3 backdrop just doesn't cut it with these... As always C&Cs are appreciated.
Posted by the 6th degree