So this past weekend my local gaming club, Red Steel Preston, had their first 40K tournament at their new home in Harlequins games store in Preston (after our previous home, Worthy Gaming, closed down).

They decided to hold a Kill Team tournament using the most recent rules from GW; so 200pts, 0-2 Troops/0-1 Elite/0-1 Fast Attack, no more than 3W allowed and no Flyers. Extra VPs were awarded for bringing cake and terrain (nice touch).

It was my first Kill Team game so I had no idea what to take, but had the option of Nids and CSMs. After poring over the codexes, I had narrowed it down to either a squad of Chosen in a Rhino or Tyranid Warriors with a Hive Guard. The Chosen & Rhino were initially appealing given how versatile they are when tooled up, but you really don’t get much for 200pts…something like a Havok Launcher on the Rhino (which is a great buy IMO) and an Autocannon and Plasma on the Chosen…hardly the deadliest of units… 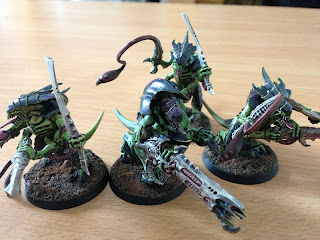 Instead I went with the gribblies; three Tyranid Warriors with Lashwhip, Bonesword and Deathspitters and a Hive Guard. The Leader got Eternal Warrior (to help with annoying S8 insta-gib), a second Warrior took Shrouded and the Hive Guard took Preferred Enemy (v.useful when hitting on 3’s and wounding on 2’s). Only having 4 models with a 4+ save didn’t seem great, but that is 11 wounds and 11 shots per turn (with Split Fire, that’s darn good). A few test-games before the event were hit and miss, with me either winning big or getting tabled…eek.

On the day we had 12 entrants with a range of different Kill Teams; a few 5/6 man CSM/Marine squads, some Warp Spiders,  a god-evil DE Venom and shooty death squad (more on that later…), a few teams of about a dozen (IG vets, scouts etc) and two ‘teams’ of about 25 (IG and Kroot).

As with practice, my games were hit and miss…winning one game without much trouble and getting tabled in the next…then tabling my next opponent and losing the one after. Some of the results came down to the pairings; 4 models against 26 Kroot did not go well, but against half a dozen MEQ I was breaking face.

The other big impact on the day was how bad my rolling was compared to a few opponents… For example, one game was lost after the 3 Warriors ganged up on a Dark Angel with a Storm Shield; for about 8 turns of combat I consistently only wounded with one or two of my 12 attacks, whilst he saved them all and ground down the rest of my team with a Power Sword. Another game almost ended in a loss after a CSM Champion managed to make every single FNP roll for 4 turns against my entire team…

The tournament was eventually won by the Dark Elder player who took the Venom with 5 guys inside. That measly team was putting out 2 Blasters and about 27 shots per turn, whilst protected by Night Shields (?), jinks and an invulnerable save. The guy didn’t lose a model the entire game – apparently the most damage done was someone glanced the Venom. It was just moving around and hammering model after model with dozens of shots until they died. In my game I managed to get 1 shot off (I didn’t realise weapon range was reduced until halfway though) and may have stood a chance if I could pop the Venom...which passed its inv. and went on to table me. Sad times.

Despite the inconsistent games, I still managed to place 4th overall and 2nd in the painting competition – so overall, a pretty good day!
Posted by the 6th degree