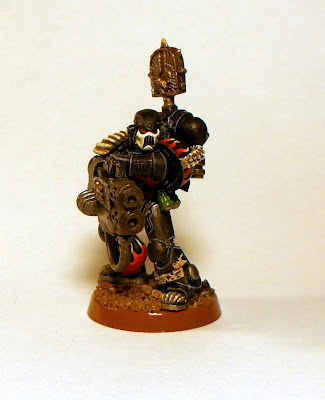 Before I had the Legion of the Damned Squad posted here, I had purchased the Heavy Weapon Multi-Melta Legionnaire to take advantage of the Legion's Slow and Purpseful/Relentless ability and Deep Strike (with re-roll if needed) to get rid of any pesky heavy tanks - looking at you Ultramarines! The problem was then to match the wicked paint scheme. So with a little experimentation and a lot of checking the other members as I went along, I painted this fella to match. 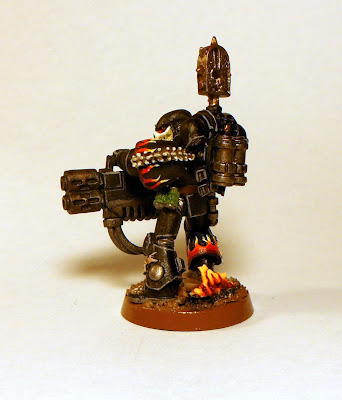 The hardest part was to do a convincing job on the armour flames, but I think they match the rest of the squad quite well. The bone pieces were simply Graveyard Earth base with Bleached Bone and Skull White highlights dumbed down with a Devlan Mud wonder wash. The flames from the base were taken from a spare set on the original Flamer armed Legionnaire, nice 'cos it means they all get some! 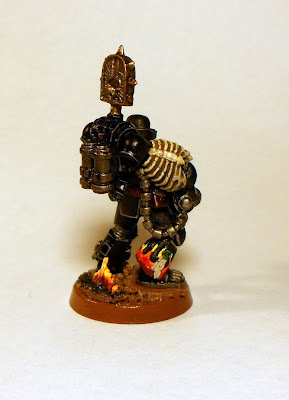 Metallics were tarnished with Devlan Mud and Badab Black washes, and some Tin Bitz on the MM nozzle. Here they all are together, ready to deep strike and be a thorn in Pornstarjedi's or 6thDegree's flanks! 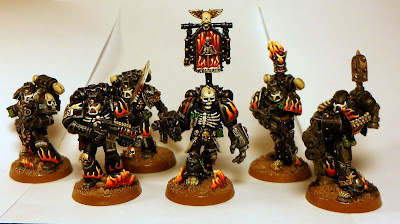 I've scheduled this post whilst away at sea, hope the other two have been posting to keep you avid readers amused...
Posted by Siph_Horridus

Labels: Legion of the Damned