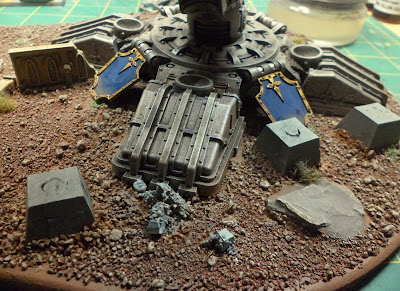 Welcome back Titan Enginseers, some might say a small and insignificant step, but nothing is insignificant about a Warlord Titan step - I started from the bottom up, a small addition - the in-between Toe Armour! The first of the Armour Plates for me, so significant to me at least ;) 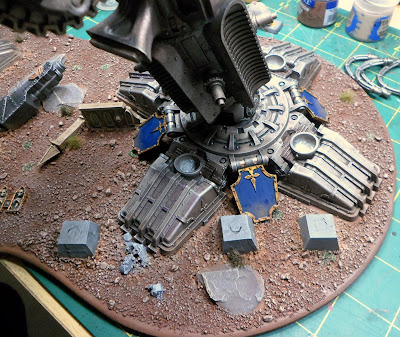 The blue was a test of the Titan overall scheme, Kantor Blue base, FW Airbrush Night Lord Blue around the edges, washed with FW Airbrush Clear Blue and done - a decent match to the other Titans in the Maniple so a win win. 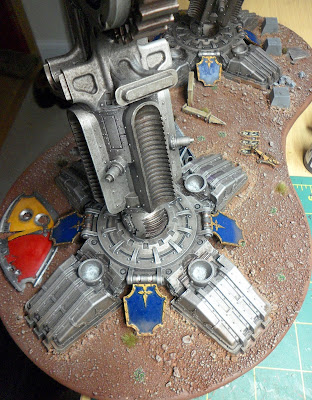 The gold trim was Model Colour Brass (#174) and I must say the coverage is exceptional over the blue, and smooth and from a dropper bottle, so another win. This was washed with Agrax Earthshade to knock back some of the brightness and give some shade around rivets, similar to the other Titans, but perhaps still a little brighter than Richard Gray metallics of Reaver Honorum - but Rich said this was the colour he used, maybe more shade required but I kinda like the subtle variations inbetween Titans - they all have different stories so it stays. 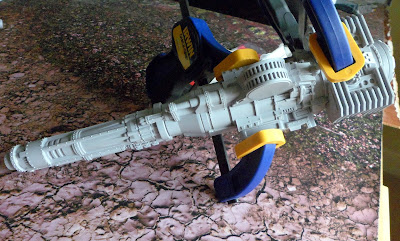 The Build also continues with the arm mounts, a Belicosa Volcano Cannon. I have also bought magnets for holding and prevent pivoting and a nut/washer/bolt assembly for the central axis fastener as a backup and secure method - should the magnets become unstuck.

Just a small update, but important to me! Getting this thing done at last feels good... The TOC Walk UK 2019 will have another Loyalist Warlord! Promises promises...