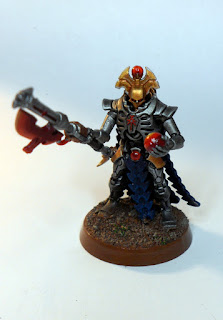 Hello Dear Readers, thanks for dropping in. This is the latest progress I made with any of my Armies, I had this guy from the Annihilation Barge kit laying around for, ooh, you know a few years (May 2014!) and finally thought I should finish him off. 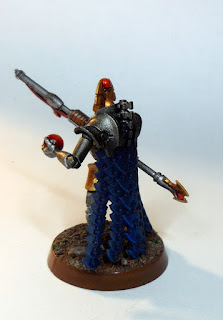 The base was a standard 25mm base but extended to 32mm using base adapters to give him more gravitas over the Warriors who are all on 25mm bases - I probably won't change them, unlike my Marines. The cloak was painted the same accent colour as the rest of the force, Necron Abyss. I signified his rank with the use of Gold on the head. 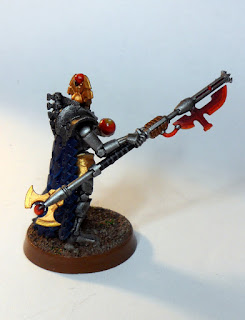 The WarScythe was painted the same reds as the Gauss energy and the base of the staff echoes the golds used in the head ornamentation. I slightly converted the WarScythe arm to bend it at the elbow for a less 'thrusting aloft' feel than the original straight arm. When I do a Command Barge, the Lord embarked can have his thrusting arm. 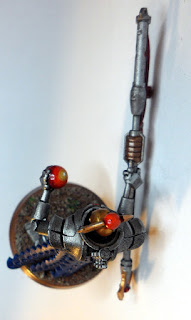 Here is another view shot of the Resurrection Orb colours, glowing a bit brighter than the Gauss energy elsewhere.

Well, there you have it, a simple use of a spare figure to fill a cheap HQ slot if needed, or to represent a dis-embarked Command Barge Lord - just means I now have to re-base Imotekh the Stormlord on to a bigger base to match!
Posted by Siph_Horridus