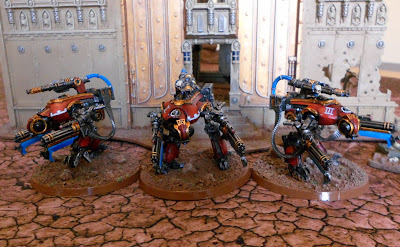 I had the opportunity to purchase some fine miniatures from fellow top blogger Mordian7th from across the pond, and he graciously let me bid even though he wasn't originally offering international postage, and since he knew my corner of the blogosphere, we arranged the postage between ourselves and I am now the owner of some great FW sculpts.

Ever since I saw the FW release of these, I had to get some, they reminded me of the Crusader Robot from yester-year and their insect quality made the rule of cool valid - some house rules will hopefully mean I can field these 30K robots in my 40K games...

His original post can be found HERE, I even included a phot of the Shrine of the Aquila (first photo) to match his post ;) All I have done is painted the bases to match my own forces, and added lenses to the weapon servoskull and rotor cannons, and a quick fix to the fibre-bundle links of the blue power lines got done - just a minor fix ;) These are a great addition to the collection, I now own some genuine Mordian7th miniatures, thanks Mordian7th!
Posted by Siph_Horridus