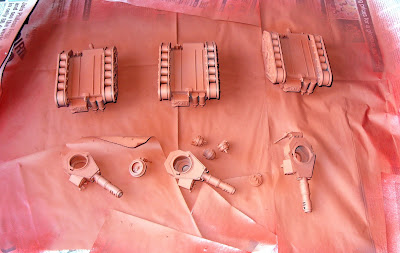 So I have finally started to apply some paint to the Emperor's Fist Tank Company I assembled last year. They have sat patiently in the cupboard waiting for some spray paint. The plan is to spray them with Primer, then Red, then mask off some of the areas then spray Beige to create a camouflage effect, then wash and finally highlight and detailing - the same process i did for the Hellhound and that came out okay. 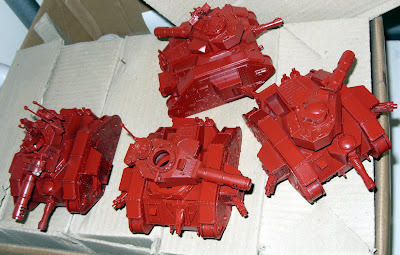 These will form the armoured wing of the Vraks Planetary Defence Force I've started to support the DKK forces eventually. I have already posted the first squad and the hellhound in the same red and beige livery.

This will take some time due to being away at work abroad for 11 weeks out of every 15 but hey it pays the mortgage!
Posted by Siph_Horridus