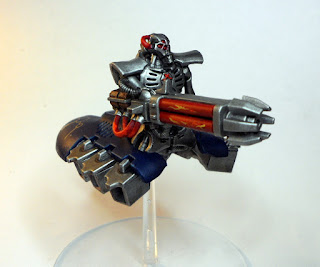 Hello Readers, thanks for dropping in to have a look. I have been neglecting progress with the Necrons for a while now, distracted by Ad Mech, Relictors, Grey Knights, Warlord Titans and various other distractions - but time to address this a little.

I've had a number of Necrons laying about needing some attention, of these the Destroyers were low down the priorities but with the latest (now old!) Codex improvements the Destroyers gain their own formation which goes some way to address this. 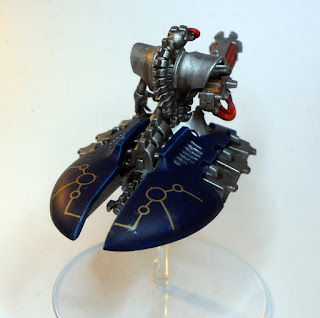 I continued the blue accent of the army with the carapace and some gold in the transfers. Other than that, Army Painter Plate Metal washed with Nuln Oil and Agrax Earthshade makes up the bulk of the colours. I use a red Gauss energy for spot colour across the army too. 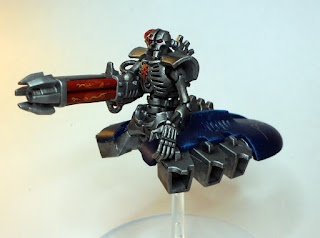 A quick and simple paint job, S5 AP3 2 shot Gauss Cannons which cut through MEQ 3+ armour, with preferred enemy (everything) for re-rolls of ones and the Destroyer Cult bonus "Extermination Protocols" allows all units to re-roll failed to wound rolls and failed armor penetrations rolls in the shooting phase. Combine that with the already good strength of the Destroyers Gauss cannons and the Gauss rule itself, which allows you to wound models regardless of toughness on a 6 or to glance a vehicle on a 6 and you have a potent unit that has a chance to wound anything on the battlefield. Oh, and Preferred Enemy Everything for re-rolls of 1's To Hit. 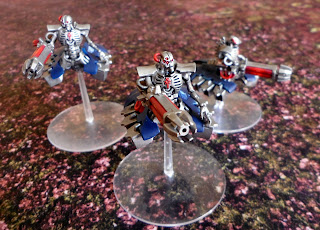 The Destroyer Cult is made of a Destroyer Lord plus 3 units of Destroyers and 0-1 units of Heavy Destroyers, s I have a fair few more minis to complete before I would like to use the bonuses... but here is the first Squad done. I could of course field these three as Units of One each, but they won't last long that way, 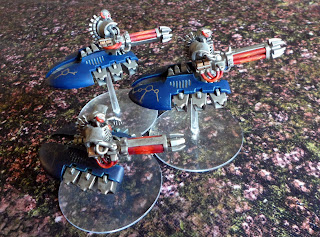 I did pick up some Heavy Destroyer Finecast kits but they were rubbish casts, so I will probably convert some using Immortal Weapons. Well, thats that for now, now I have a taste of Necrons again, perhaps some more attention is needed on the Necron to-do pile!?

Thanks for dropping by, cheers, Siph.
Posted by Siph_Horridus