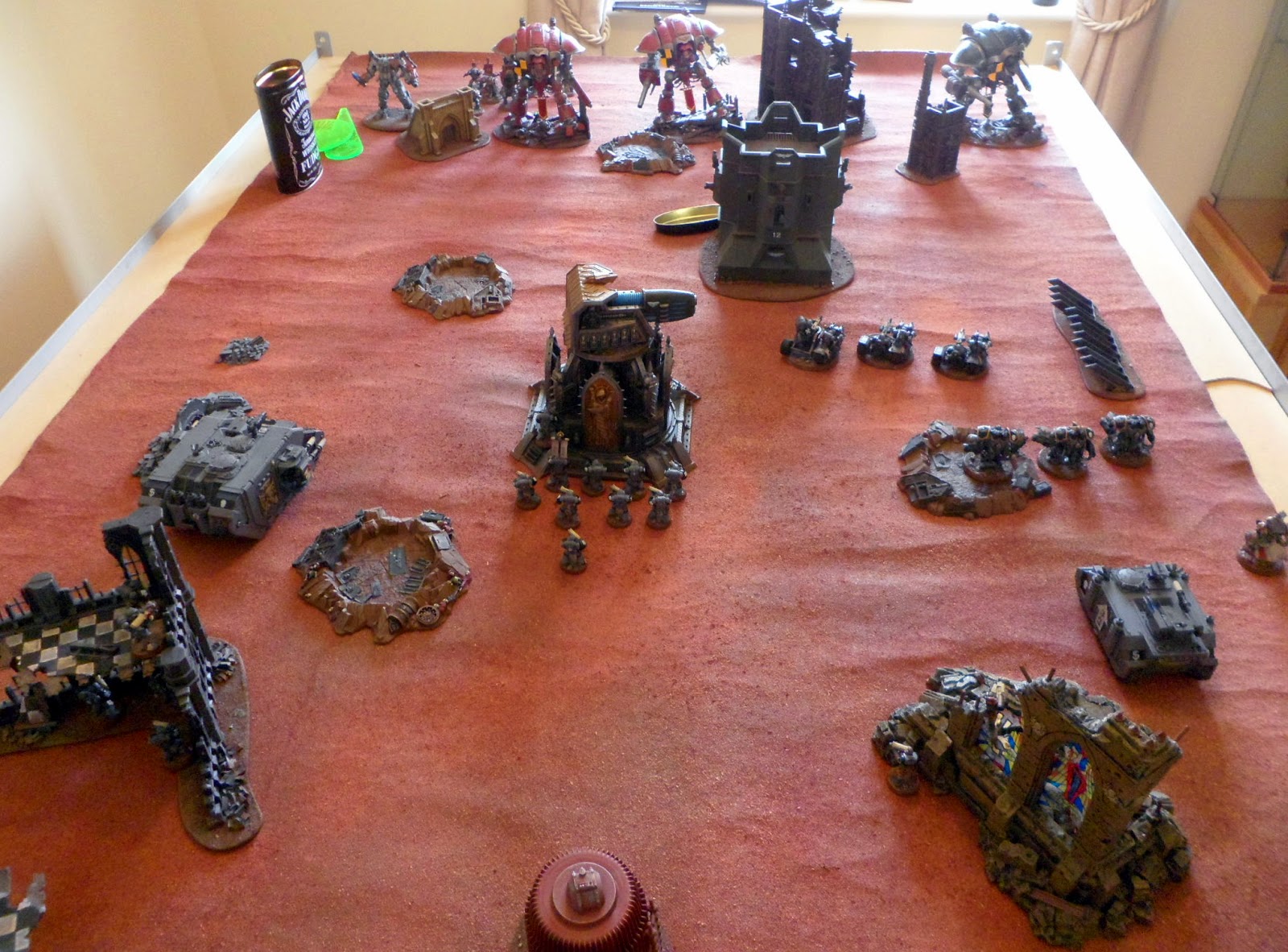 Hello Readers, well after that 4000pt 3-way Superheavy Smash Up, Lord Halfpenny and I had a normal batttle, a little smaller than the previous, the standard 1850pts in order to test out his BlogWars list for the 'From the Fang' upcoming friendly tournament. 6thDegree and Lord Halfpenny will be attending again this year, so 100% attendance from the Weemen! I've personally managed 1... and again will be out of the country for this one too.

Anyway, back to the matter at hand, it was a BlogWars scenario, Purge the Xenos, Hammer and Anvil Deployment, points awarded for destruction of units, 50% points for units over 50% damaged/lost and this was converted to VPs at the end with a maximum 30VPs, plus 1VP for each Slay Warlord, First Strike (First Blood in either first turn) and Linebreaker.

The Relictor force comprised of Marneus Relicgar (Calgar), a Termie Assault Squad in Landraider Godhammer, 3 Grav Centurions, 3 Attack Bikes with MM, a Squad of Scouts with ML, a Tac Sqd with ML, a 10 man Tac Squad with Grav/Combi Grav and two Stormtalons armed with Skyhammer Missiles and TL Assault Cannons - the Knights have no AA.

The Knights force had a Senschal Paladin Knight, a Paladin Knight and an Errant Knight, along with Draigo, Dreadknight with Gatling Psilencer, 5 GK Terminator Squad and a GK Termie Librarian. Small but hard hitting. 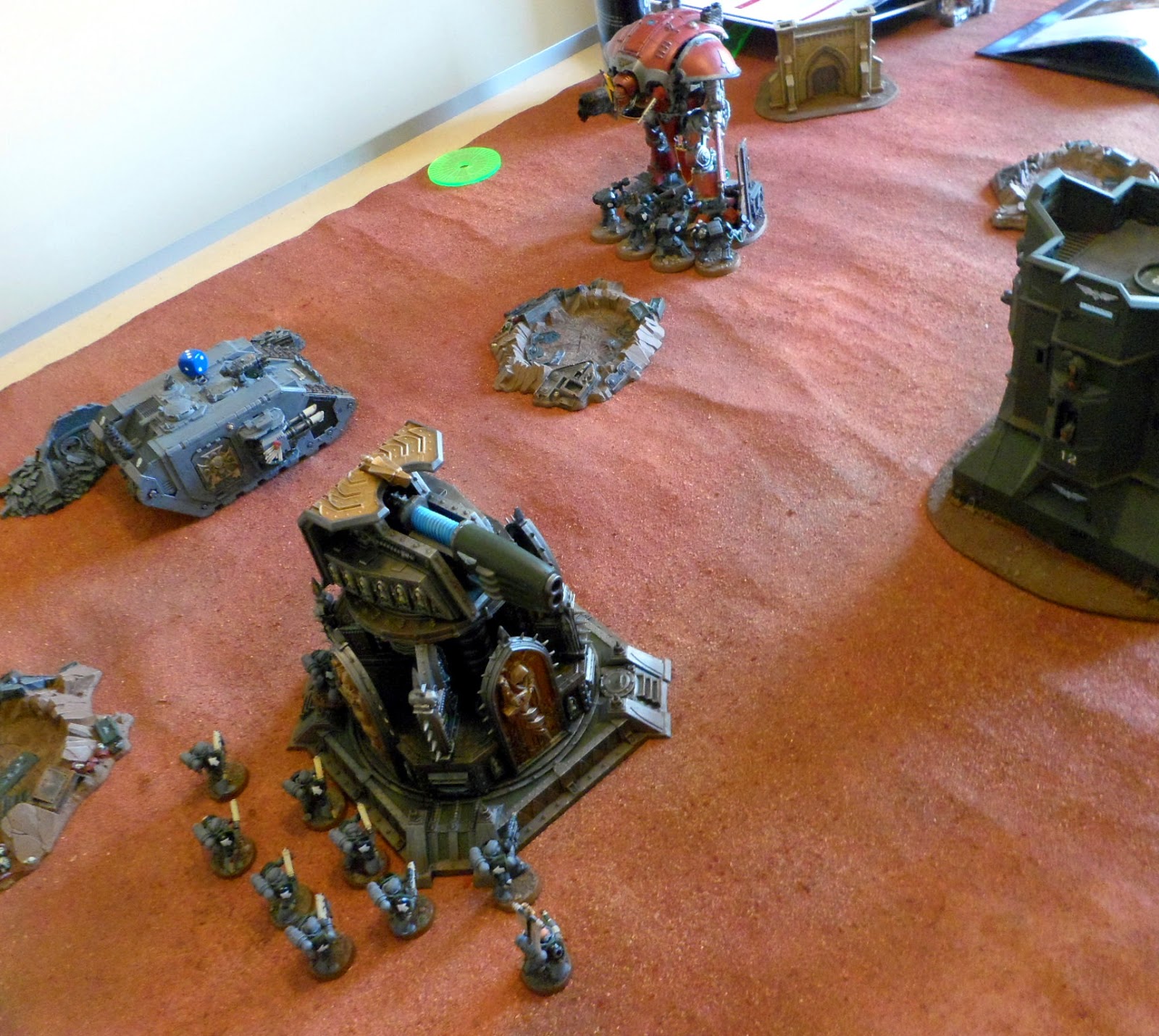 Relictors Turn 1 - the Relictors moved up, Grav Centurions out of range, 3 Attack Bikes moved up to fire on the Knight Senschal, two MM were in range and struck the Knight, but double 1 was rolled so both failed to damage (over half distance). Marneus Relicgar orbital bombard was the only damage, leaving Knight Errant on 5HPs, a Terminator also caught in the blast made his invulnerable save. Krak missiles, Landraider Lascannons and Razorback Lascannon all failed to damage the Knights. A poor opening turn. 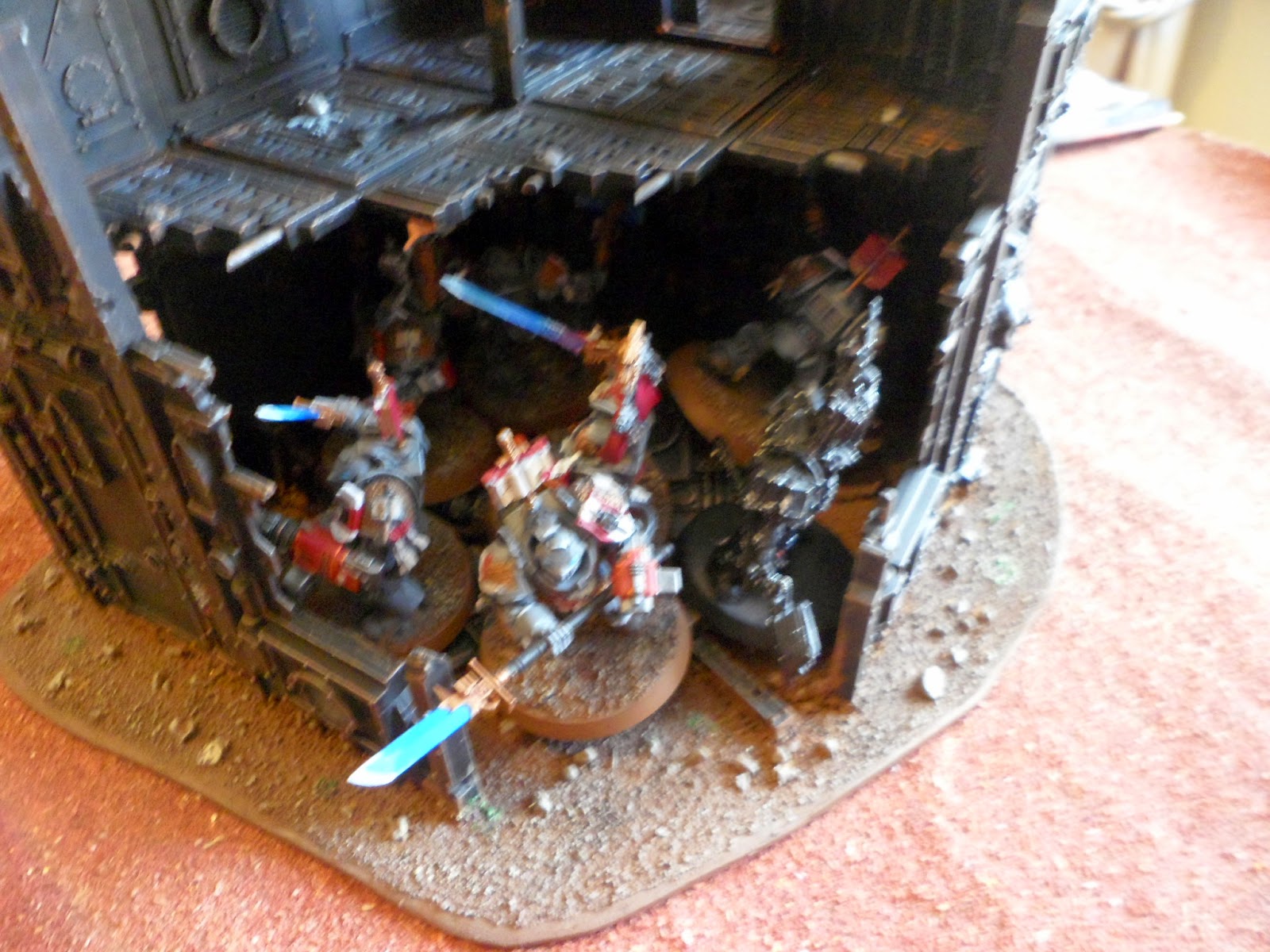 GK and IK Turn 1 - the GK force rolled for Psychic winds, 5 dice pool plus 5 more from units and promptly Gate of Infinity towards the Relictor back lines, however a mishap occurred and they materialised within a ruined building, one taking a wound but saving. All three Imperial Knights moved up. The Dreadkhight Gatling Psilencer, emboldened with 'Force' slew one of the Grav Centurions, another was wounded by IK Battlecannon blasts, the Senschal opened fire with Battlecannon and Heavy Stubbers wiping out all three Attack Bikes, the heavy stubber bypassing the Power Armour twice with rolling double ones giving 'First Strike'! The Errant Thermal Cannon glanced the Landraider Godhammer down to 3HPs. 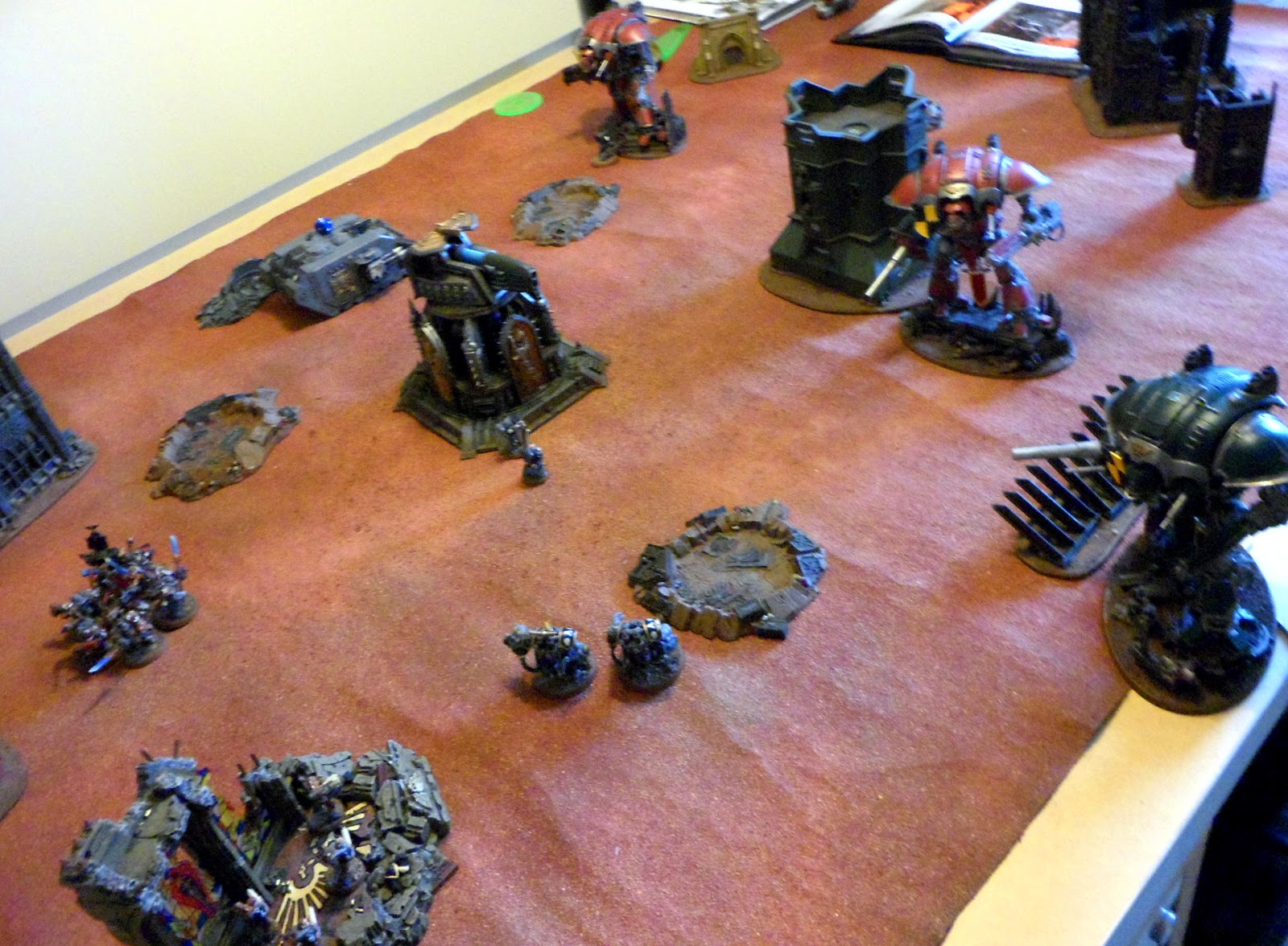 Relictor Turn 2 - The Grav Centurions returned fire on the Dreadknight, wiping him out. The Landraider moved toward the Errant, Ion Shield saving the Lasscannon and MM shots, disgorging its cargo of Thunderhammer Terminators who charged the Errant, striking him in the knees and reducing to 2HPs but losing one of their number. The Razorback again hit the Senschal Knight but the Ion Shield saved again. Krak missiles slammed into the wounded Knight Errant, but failed to penetrate the thick armour.

Knights Turn 2 - Imperial Knights all move up, Draigo's Gate of Infinity is successful after a perils roll of 1 and successful leadership so just wounding Draigo once, into the back lines of the Relictor force. The Knight Paladin battlecannons the Centurions but fails to bypass their armour. Heavy stubbers hit five times but fail to damage. The Knight Senschal Battlecannon shots wipe out 6 Tac marines in the centre but charges Marneus and totally destroys him with 11 'D' hits so no saves! This gives the Knight force 'Slay the Warlord'. 3 Thunderhammer Termies locked in combat with the Knight Errant fall to his stomp attacks and Reaper Chainsword. The GK force open up Storm Bolter fire on the wounded Tac Squad in the centre killing another two, leaving just the Grav weapon marine and Sergeant. 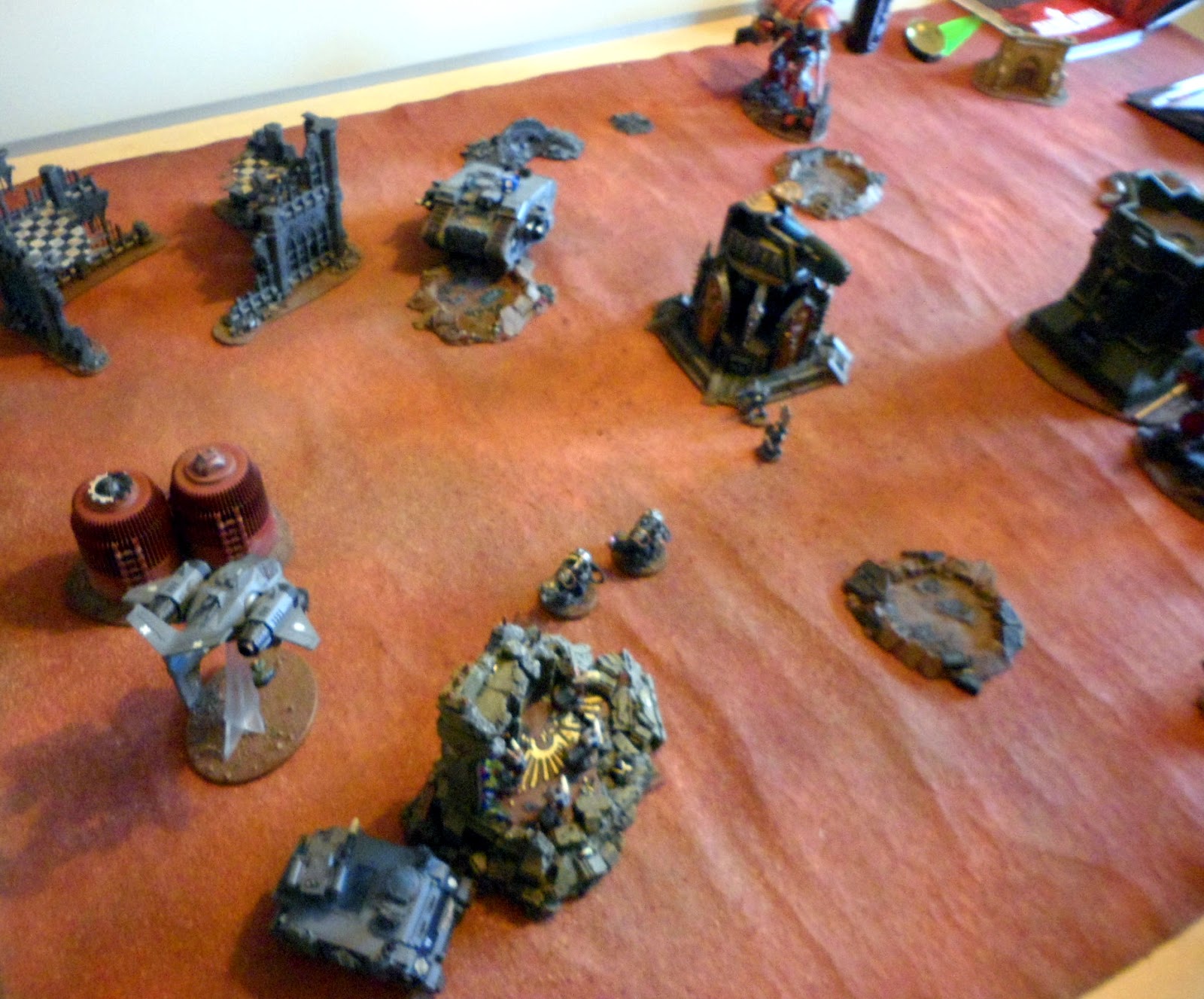 Relictor Turn 3 - Seeing the Knights bearing down on them, and seeing their commander wiped out the force holds its ground and concentrates efforts on the GK force in it's backfield. The single arrived Stormtalon, Grav Centurions, Grav Tactical marines and Razorback with Las/Plas wipe out Draigo and his squad, Draigo falling to Stormtalon Assault cannon fire, nice, gaining 'Slay the Warlord'. The Landraider who had turned to aid the force against the GK force had limited targets left, so shot the Knight Paladin but failed again to damage the Imperial Knights - Lascannons doing nothing so far this game. Locked in combat, the remaining Terminator Sergeant got stomped, Knight Errant remaining on 2HPs.

Imperial Knight Turn 3 - The Knight Errant shot the Centurions but missed, the Knight Paladin targeted the same Centurions with the Battlecannons but failed to get through the armour. The remaining Knight Senschal hit the Razorback and a Scout. The Knight Errant charged the Landraider Godhammer destroying it with Reaper Chainsword and a Stomp! The Knight Paladin charged the remaining two Tac Marines in the centre and squished them both. The Senschal failed his charge range against the Grav Centurions, their overwatch fire missed 10 times. 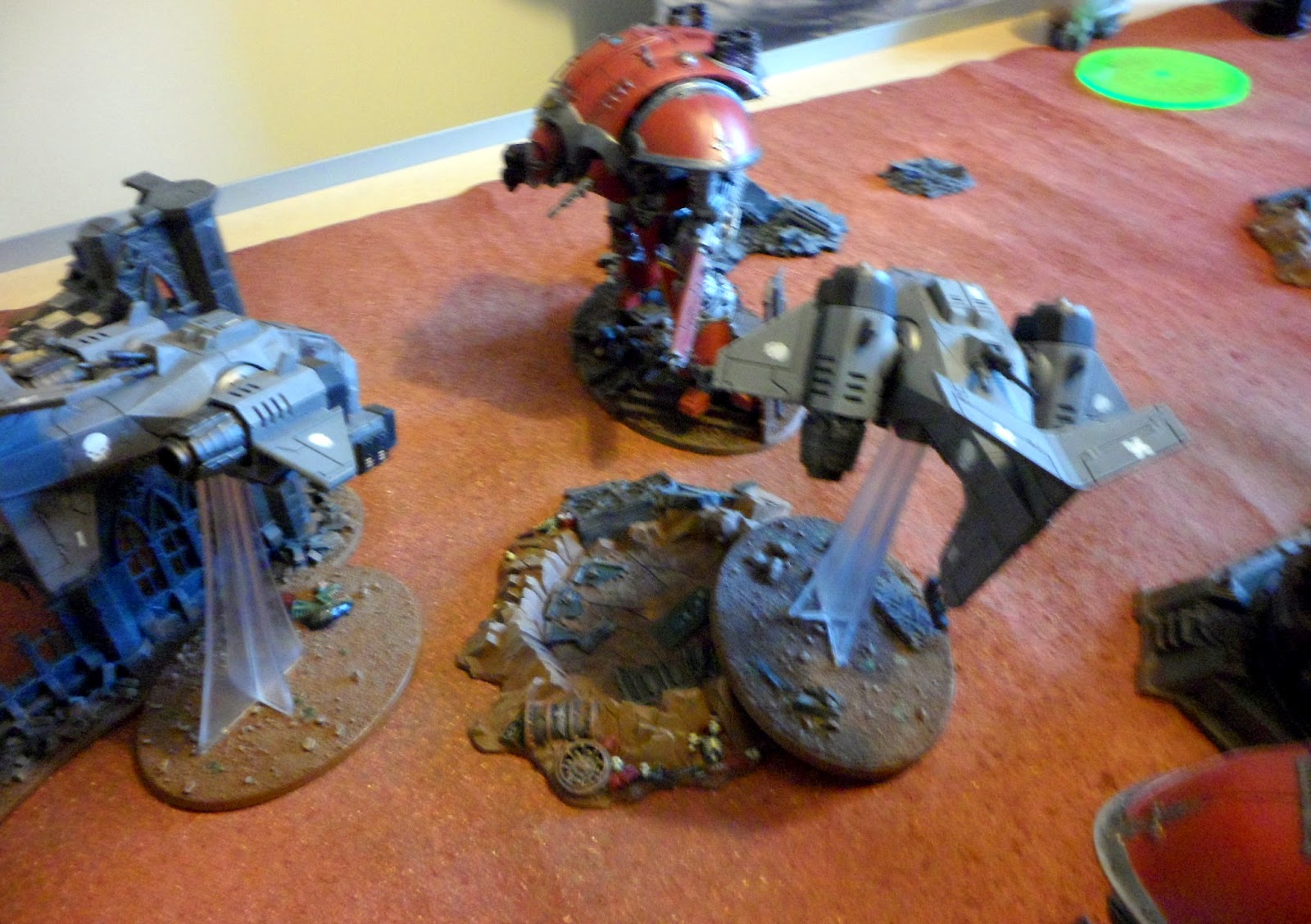 Relictors Turn 4 - Krak Missile fire from Tac Marines and Scouts bounce off the thick armour of the Errant, however the second Stormtalon arrives and shot the Knight Errant, bringing him down with Skyhammer Missiles and Assault Cannon shots. 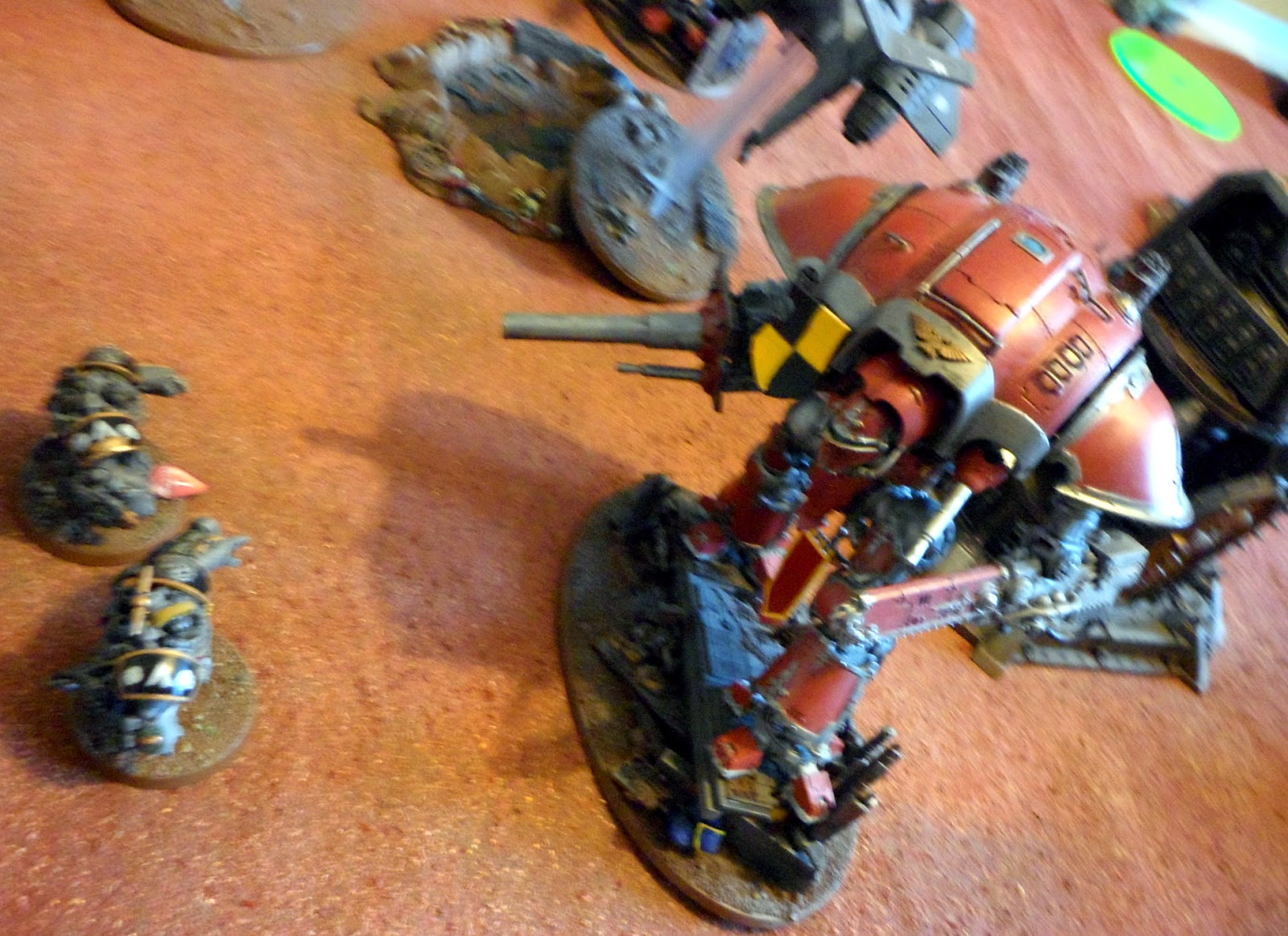 The second Stormtalon used his Assault Cannon on the Knight Paladin taking two HPs. The Grav Centurions fire at the same Paladin glancing 4 times but the Ion Shield saves 3 times reducing the Knight to 3HPs. The Las/Plas Razorback fails to damage the Senschal. 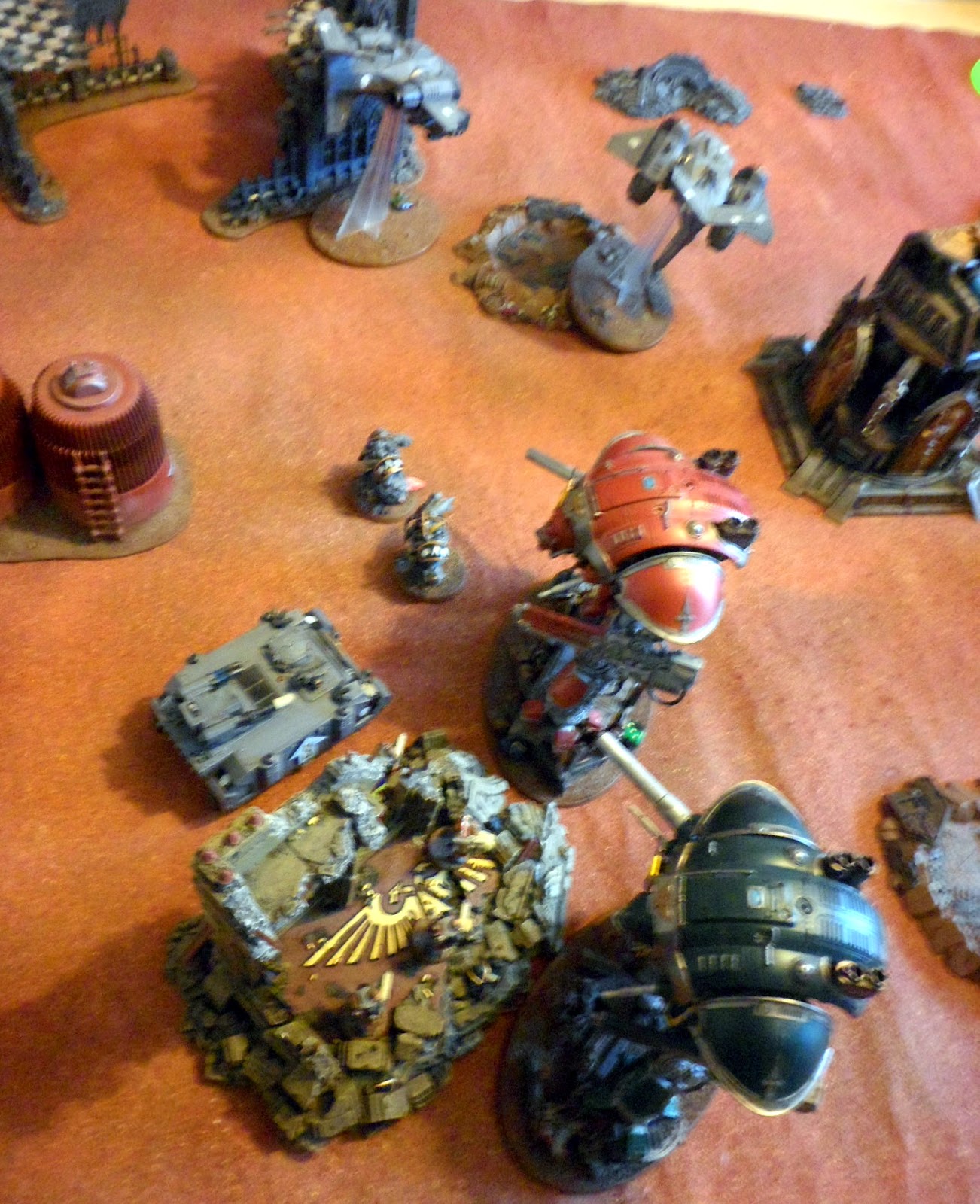 Imperial Knight Turn 4 - The Knight Senschal shoots the hiding marines in the rear ruins killing 3 of 5 and rakes the scouts with the Heavy Stubber but the Scout Armour holds firm - the Knight then charges the Scouts in the Chapel of Sanctuary ruins and destroys them underfoot, the Knight Paladin charges the Razorback and Grav Centurions in a disorganised charge failing to damage the Razorback but squishes both Centurions with the Reaper Chainsword and a stomp! 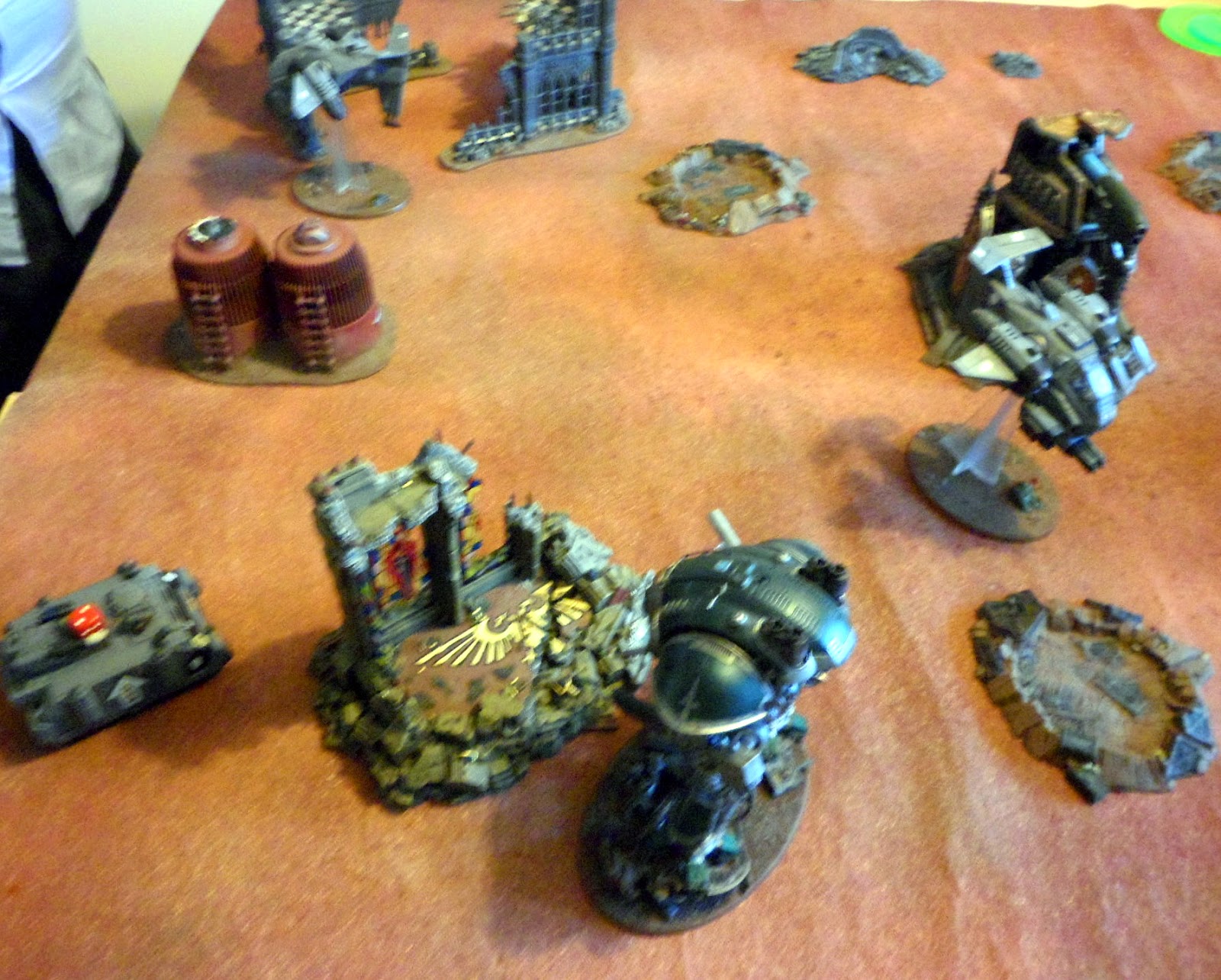 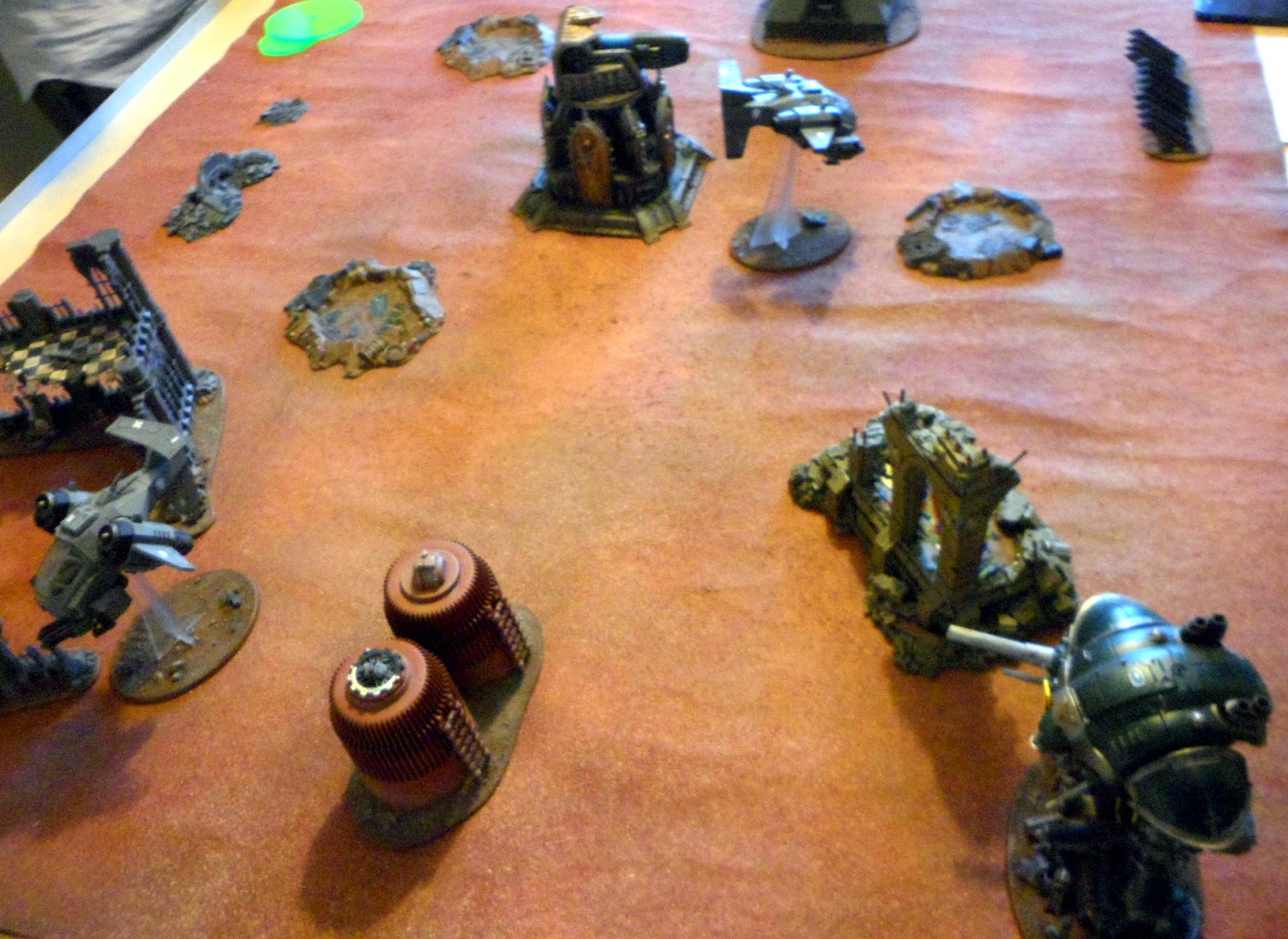 Imperial Knight Turn 5 - The Senschal destroys the Razorback in CC and roll is made for a sixth turn but it ends. 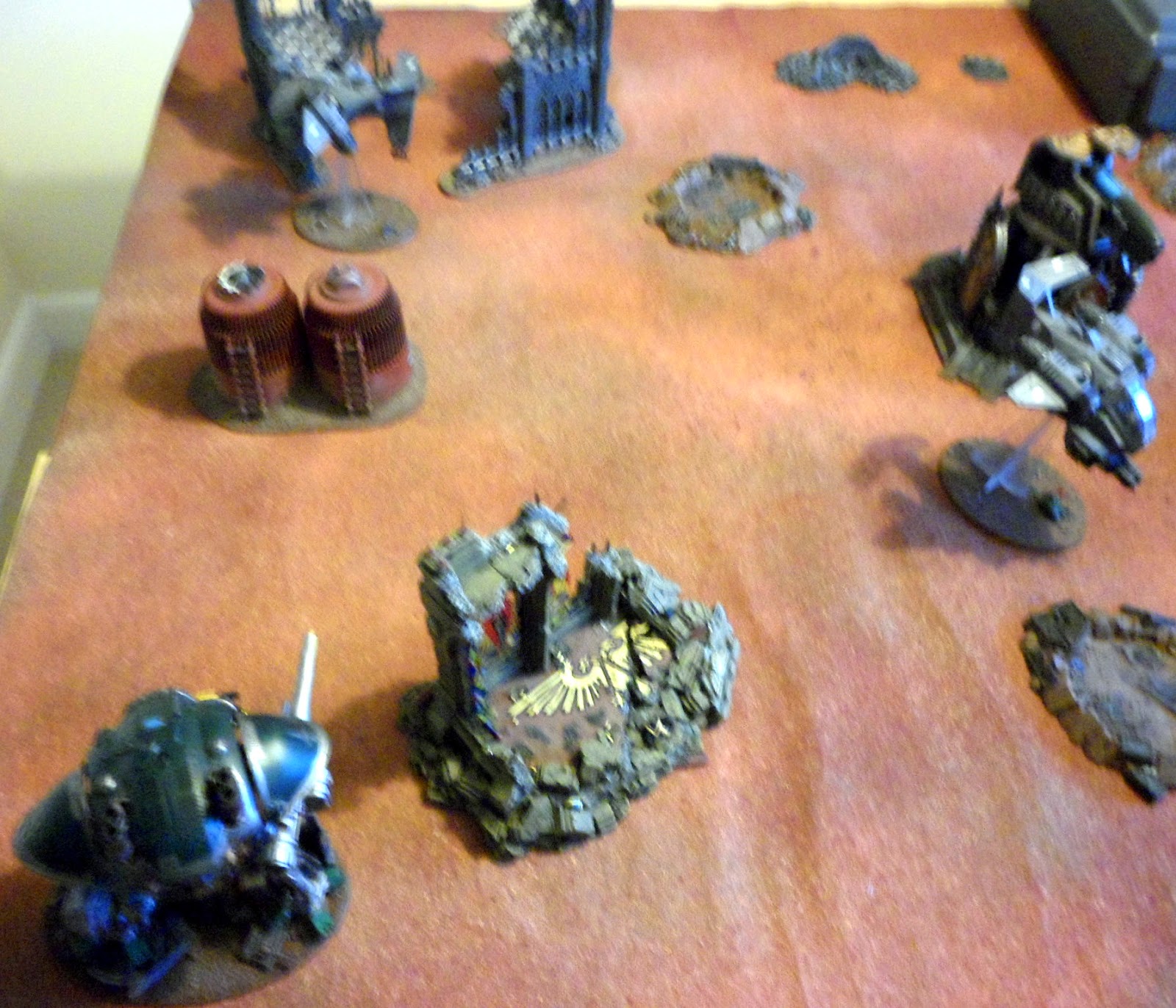 Siph - A great fun battle and surprisingly close run thing overall with the GK/IK Force on 28VPs with 'Slay the Warlord', 'LineBreaker' and 'First Strike' and the Relictors a close second after the first two turns it looked over, but with 25VPs with 'Slay the Warlord'. A bloody battle with the only survivors being a Knight Senschal and two Relictor Stormtalons and two marines. A sixth turn may have been interesting as both Stormtalons could of seriously hurt the Knight to no reply, but alas.

The Draigo/Libby/GK terminator Squad after one Mishap and a Perils of the Warp managed to kill 2 Tac Marines! And Marneus Relicgar managed to take 1HP off a Knight. Both Warlords potentially being the game's big hitters but failing in this instance and did squat all. Every Lascannon failed to damage anything all game. The Imperial Knights again proved to be a hard nut to crack, but towards the end, concentrated fire started to bring them down one at a time, I think that is the key - it's better to have two knights on 6HPs each dealing out damage than all three wounded Knights with ranged fire and 'D' Weapons in CC!

Lord Halfpenny - Great battle, I really wanted to see how the force would cope with a list Siph would have put together for BW- the force faired well, with the Knights running through the Relictors force. It'll be interesting to see how Knights change with their new codex and some AA support from the Wardens.