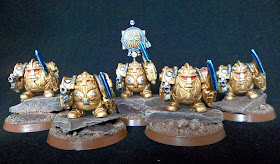 Hello Peeps, Thanks for dropping by. Something quite old today, but re-purposed. I bought these many years ago and didn't really look at them at the time. Years passed and when examining the lot I saw that these were quite a rough re-cast of the Originals, I know as I did once own the originals. The Bolter arm detail lacks a lot of the finer detail on the three nubs and the multiple cast lines give the game away.  I didn't fork out much as I remember, it was in the early days of eBay and Squats were not quite as sought after. Now stuck with them and cannot re-sell them I put them in the drawer of doom but eventually came to realise that I could use them as Terminator or more recently as Custodes!

With this new sense of purpose and my anger at being duped fading, I thought about what scheme I would like - as counts-as Terminators they could be any colour, but as counts-as Custodes they ought to resemble the Emperor's finest golden warriors - would gold suit Exo-Armoured Squats? Hell yeah, and a plan was hatched.

I used these as a practice for my eventual Custodes gold, so armed with our Lord Duncan's advice, I did the golds as described, Retributor Gold, washed Reikland Fleshshade - (okay Ogryn Flesh) - Highlighted Auric Armour Gold and further highlight of Liberator Gold. I cut off the (fake) tabs under the feet and mounted them on slate to give them more height (so I wouldn't claim modelling advantage on the battlefield) and these are the result. 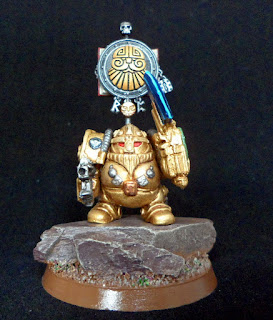 The Squad Leader has a banner made from a SM Bike aerial, and some gubbins from the Ironbreakers kit (a forthcoming squad of counts-as Space Marines), which worked out nicely. 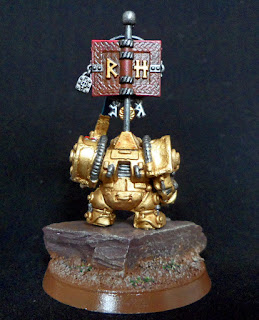 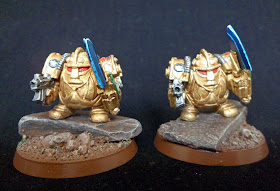 I used the Primaris Marine Dark Angel knee decals to make the basis for a winged Hammer, the Squats favoured icon, this can be seen on the (Storm)Bolter arm. 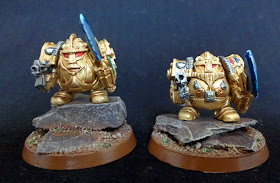 The slate gives some nice variation in look and height and helps fill the 40mm bases quite nicely. I chose to glaze the slate sightly with Calthan Brown and used the highlight colours from the bases to drybrush the rock edges, linking the rock to the base - but kept the nice purple hue. 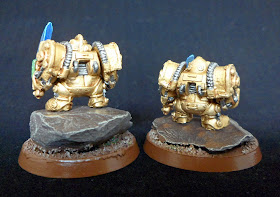 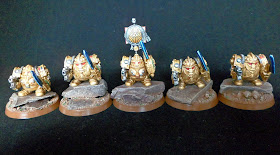 There you have it, a nice salvage job, now back ready for the tabletop to fight once again alongside my Marine forces, as Termnators or Custodes... awesome sauce.

Thanks for checking in, cya, Siph.
Siph_Horridus