I wanted to put forward some provisional rules for a 3 way battle. The logistics with a 3 way 40k battle are completely different to that of a standard 40k battle between 2 forces. The potential for these battles are infinite- opposing forces being in a position to gun down the opposition as the opposition fight to the death in close combat with the other opposing force- for teams 'dealing with the devil' as short term pacts are made (of course this would never happen in the 40k universe)
As the weeman team are gearing towards the 1st 3way, I thought I put forward some provisional rules, and see what everyone things- all comments are grateful!

I will be covering the following sections in this post,

For the larger 40k battles, I find the FoC slightly restrictive, therefore for thw Weeman 3way, the FoC will be modified to allow a little more freedom with army lists, but also to prevent a tank heavy/monstrous creature heavy army. Therefore the proposal for FoC as follows:

From this, there is to be a minimum of 2 HQ, one of which has to be a character from relevant Codices/Imperial Armour, and 4 Troops.

The army lists will be taken from the relevant codex for each army, and can include units from any imperial armour book/FW website (Siph for your contemptor :))

A copy of your army list will be required on the day, for each competitor. Any questions regarding the list can be discussed at any stage of the game. (It is also the plan to upload the lists to the blog in advance) There will be kill points involved, thus points costs are required to be included on the army list.

For a 3 way the deployment can potentially be difficult to set out, as a table hasn't got 3 long edges- this is helped by the armies involved, Siph and the6thdegree will roll to see who gets which edge, and Jedi will be deep striking onto the board with his Daemons. (a whole lot of pain is coming my way...)

For the 3way, we will each roll a D6, the highest will go first, then the second etc. If their is a tie, then the two combatants will re-roll against each other.

4)The Turn
a)Movement
Movement will take place as per normal 40k rules
b)Shooting
Again the normal rules for 40k will be followed, however an opposition can shoot into combat if no of his/her units are locked in that combat.
Shooting- any shots into combat can hit either opposition, this will be determined once hit rolls are made. A second roll is made for each separate hit this will determine who has been hit. The roll required to each a specific unit is based on the number of models in each unit. Therefore

C) Assault
normal 40k rules apply for assault, only the units who's turn it is can assault. plus the unit its in combat with (Player A Vs Player C units, Player B not involved with combat) Three way combat is possible, with rolls made to hit as per shooting (A will number of models in Unit B, vs Number in Unit C) once 'who' is hit, rolls to hit are made. Initiative is used to determine who hits first. However a unit that assaults into a 2way combat can not be hit on that first turn (as the 2 opposing units are busy fighting each other)

5) Morale
As per normal 40K, however in a 3way assault it will be the cumulative 'deaths' in a single round of combat, if there is a tie (IE Play 1, and 3 lost 3 models, to player 2, then both will need to do a morale test- if either, or both fail then they flee. rolls are made to see whether the units are chased and destroyed.

Units retreating, run towards their nearest table edge- if two opposing units flee from combat, then they have to be positioned 2 inches apart.

Army lists are to be posted next week, before 27th October.

Lots of new additions to try, and I feel it will be a case of trial and error- but It'll be fun! This isn't Competetive gaming. The only prize is kudos and ownership until the next battle between any of us, of this- 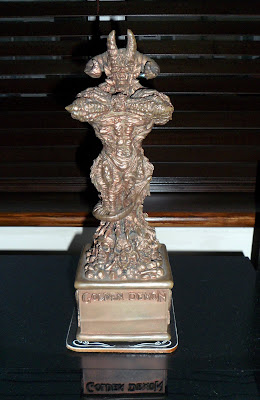 If you can make any suggestions of these rules please feel free.
Posted by Lord TITANium Halfpenny